Worcestershire contractor Nick Brain is kept very busy through the summer months with most of his dairy farming customers on multi-cut silage systems, requiring four to 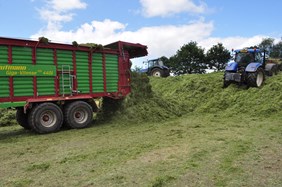 six visits. A key machine in the silaging process is a Strautmann forage wagon which ensures the operation is efficient and relatively low cost, and overall, a more ‘gentle’ process.

From Home Farm in Pinvin, Worcestershire, Nick set up as a sole trader in 2006, and started out contracting with just himself and one tractor.

Nowadays it’s a family business with three tractors and a range of slurry and silaging equipment (see panel). Nick’s father Nigel is working with him full-time, while his mother Elaine does the book-keeping. Nick’s wife Becky also helps behind the scenes with book-keeping and supporting the drivers out in the field, in-between looking after their two children.

On top of this, the business employs two seasonal staff – one tractor driver from February to the autumn, and one for a short peak period over the summer.

Nick explains: “Our customers are mainly dairy farmers, and just a few beef farmers. So the mainstays of the business are silaging and slurry spreading. This year, we will have ensiled approximately 3000 acres of grass.” 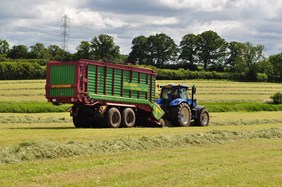 Most Nick’s customers are taking several cuts of silage, he explains: “The suckler herd farmers are wanting quantity not quality – they want to take one big cut and don’t want to have to sheet several silage pits.

“But the dairy farmers are looking for quality silage made from younger grass, so most have adopted a multicut system. This means, weather permitting, I’ll be back to the same farm taking four or five cuts each season,” explains Nick.

Adopting a multi-cut system has been widely recognised to increase the metabolisable energy content of silage by around 1 MJ/kg DM, compared to traditional cutting systems. This higher forage quality can reduce the reliance on bought-in feeds and/or be used to boost milk production from forage.

Working with his father and part-time driver, Nick provides the full service: mowing, raking up, picking up and chopping grass to a 35mm length with the forage wagon, and consolidating with a buckrake on the clamp.

Nick adds: “It’s cheaper for farmers to use forage wagons – especially on the multi-cut system where the grass is shorter and yields lighter – I charge them by the hour, and it takes as long as it takes. Normally I’m going at around 10km per hour, although with very light crops I can get up to a forward speed of 20km per hr.

“When there’s just one or two forage wagons involved in the operation, instead of a forager and a circus of 5-6 trailers, it’s a ‘gentler’ quieter process. It’s also a huge saving in fuel bills and labour costs for the customer. And there’s less traffic going onto the field, and less going through the villages too.

“Compared to trailers, the forage wagon tyres are extra wide and on steering axles so this stops the ground getting ripped up, and there’s no mess when you’re turning.”

With plenty of silaging work coming in, he soon bought a second one - a Giga 3001, and then replaced the old Super Vitesse with a newer model. Both the new machines now had a Control Flow System – CFS - for picking up the grass.

Nick explains: “Grass is lifted into the wagon and split across the roller and fed across the knives for a consistent chop length. There’s no lumpy feeding.

“When a forager is used, grass gets blown into the trailer and it’s quite fluffy. But with a forage wagon it’s more compacted, so it’s a heavier load and there’s less travelling back and forth to the clamp.

“I’ve looked how other machines perform, and I like the consistency of chop with the Strautmann. The key is to keep the blades sharp - when they go blunt, the grass just folds around them.

“The recommendation is to sharpen the double-sided knives every 12 hours. As the multi-cut grass is young and less fibrous, there’s less wear, and with the driving back 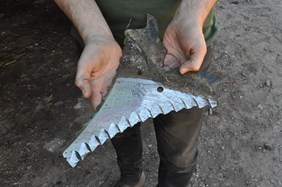 and forth to the clamp, I can work all day for 2-4 days and usually only need to sharpen them twice a week.

“I can do all 45 blades in less than an hour with my bench sharpener, including removing them using the quick release mechanism, sharpening and then replacing them.

“When I had the two forage wagons, I didn’t always have two tractor drivers available to use them,” explains Nick. “Or we’d just take the larger one out and leave the other behind. I got fed up of looking at it doing nothing. So in 2018 I traded them both in at our Strautmann dealer, Tallis Amos, and bought the largest model in the Giga Vitesse range, the 4401 with a loading capacity of 42m3.

“I opted for a standard width roller on the Giga but next time I’ll go for the wider roller as this would be good on the corners.”

Nick opted for a galvanized steel floor on his new Giga machine as an extra, he explains: “My last three forage wagons had wooden floors, and I’m going to see how well this wears by comparison.”

The Giga Vitesse comes with load control as standard; Nick also opted to have four cameras installed: one on the back tailgate facing behind, one on each back corner where there are blind spots, and one inside the machine facing towards the loaded grass. “It’s handy to have the camera on the inside as I can see how full the wagon is, so it saves me time. There’s nothing worse than just getting into a new field or getting to the far end of a field, and then the buzzer goes off because there’s a full load!”

Over the years, Nick has developed good working relationships with as many as 10 other contracting businesses and will sometimes join forces on silaging or slurry spreading work.

Nick explains: “We are all small outfits, but by getting together we can take on the larger jobs. For instance, on one large dairy farm this year, there were four of us, each with a forage wagon - two Strautmann's and two other brands.”

Nick reckons to put around 2000hrs/year on each tractor, he adds: “For now, I’m planning to stay as a 3-tractor business. It works for the family, and by being able to join up with other contractors, it works for my customers too. These days, I never leave the house thinking ‘what am I going to do today?’”