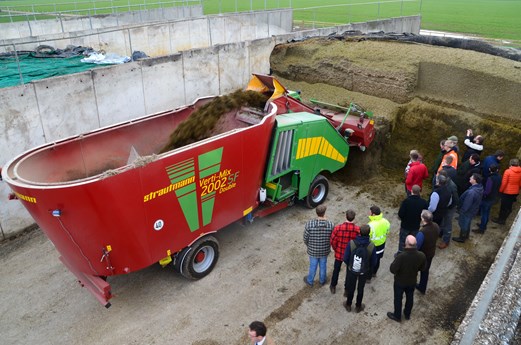 Self-propelled mixer wagons have the potential to significantly cut labour, fuel and machinery running costs, according to feeder specialist Strautmann.

With milk price volatility looking like it’s here to stay, more and more dairy producers are looking increasingly closely at every element of their expenditure.

Close scrutiny of what machinery really costs to run can make for pretty surprising reading, according to Strautmann importer Opico.

Speaking at a recent demonstration day at Cannington College in Somerset, Opico managing director James Woolway outlined the startling amount a typical unit can spend on running a feeder wagon, tractor and telehandler.

“Using the example of a 720-cow dairy operating a trailed 24cu.m wagon seven hours a day, the figures come in at an eye-watering £96,984 when you take into account depreciation, servicing, fuel use, tyre wear and finance costs on a 150hp tractor, twin tub mixer and telehandler plus the labour required to run the kit.

“In contrast, because you go to one rather than three machines with a self-propelled, nearly all those numbers are slashed, bringing the equivalent running costs down to £77,974 a year. That’s still a huge amount of money but the saving adds up to nearly 25%.”

The company has put together a cost calculator for different sized dairies and surprisingly it’s not just the biggest operations where a self-propelled machine can be justified – a 400-cow unit would see savings of approximately £4000/year by switching systems.

So where do all these savings come from?

Fuel is perhaps the most obvious factor because there is one engine running rather than two. But when you look more closely, that one machine is running more efficiently too. With no loader shuttling to and from the wagon Strautmann claims fuel use on dairy farms across the Continent is generally shaved from 1.087-litres per tonne of feed handled to 0.795-litres per tonne – a 27% saving.

On top of that there’s the element of time saved, with the hours spent feeding generally cut by 25-30% when producers make the leap from trailed to self-propelled mixers. That’s down in part to the loading process taking less time but also because, having passed through the milling head and up the loading elevator, by the time the ration components reach the tub they are already well broken up so the actual mixing time is reduced.

On top of that there’s significantly less clamp wastage because a self-propelled’s milling head rotor leaves so much cleaner finish than even the best shear-grab. Also, because it’s not cutting so deep into the face, the machine travels across the face that much faster with the result that it’s kept fresher and any inconsistencies in dry matter and composition are ironed out.

But it’s not all about the savings according to Strautmann.  A number of factors mean the ration produced by a self-loading feeder-wagon has the potential to lift milk yields tonne-for-tonne.  On farm demonstrations have already shown an uplift of 1-litre per cow per day.

Independent ruminant nutritionist Hefin Richards explained why this might be.

“The key to getting cows to milk well is a healthy rumen with a stable pH, that’s only possible with a consistent diet day in, day out.

“With a self-loading wagon you’ve got much less opportunity for errors in loading and the potential to achieve a decent, uniform, lump-free mix in a shorter time because the cutting head has broken up the material before it’s even entered the tub.

“Ultimately that results in an accurately put together diet that is difficult for the cows to sort and means each animal is getting all the elements it needs in each mouthful.”

To hear more from Hefin about how to produce the perfect ration and the potential benefits of moving to a self-propelled feeder wagon go along to the next Strautmann demo day at Harper Adams University on 22nd March or Dundrennan in Dumfries & Galloway on 2nd May.  Full details of both events and how to reserve your place can be found on www.strautmann.co.uk/demodays