Adding a forage wagon into the fleet may be a relatively new move for some silaging contractors, but, operating with two forage wagons, a Yorkshire business requires less labour and less fuel than self-propelled forager and trailer systems. 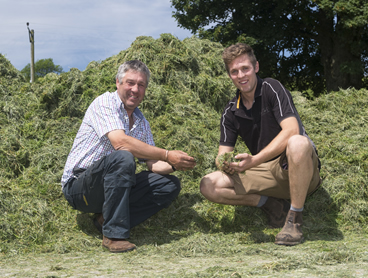 Based at the family beef and sheep farm near Richmond in Yorkshire, Robert Stones runs a contracting business - WC Stones and Son - which specialises in silaging operations. His son Jack joined the family business full-time this year after becoming a fully trained agricultural engineer; Robert’s wife Cheryl and daughter Olivia manage the office and paperwork.

In the summer months, an additional 4 self-employed staff join the team. Services include mowing, picking up, and round bale wrapping for 2nd cuts. In the winter, Robert takes on maintenance work for a local council, e.g. snow-ploughing, gritting, and also some hauling for a potato farm.

Robert and his father Clark, bought the first forage wagon, a Strautmann, in 2007. Since then they have stayed with the brand appreciating its reliability and the good back-up received from local dealer Russells, in Northallerton.

Robert reckons to be the only contractor with a forage wagon for 40miles. But he has good reasons for this strategy: “It’s not easy to get good labour around here. With a forage wagon a three-man gang can cut and transport 50 acres/day easily. That’s one man on the wagon, one rowing up and one rolling at the pit.

“By comparison, a self-propelled forager would needsix men - one rowing up, one on the pit and 4 tractors/trailers. That’s not just more labour, it’s more fuel consumption too.

“Also we can pick up the small jobs – say 40 acres of 3rd cut – with our 3-man team, whereas for contractors with self-propelled machines, it’s just not feasible.”

Silaging work is spread over a large radius which covers all of North Yorkshire and south Durham, west to parts of Cumbria, and east to Malton in East Yorkshire. Half these customers are dairy farmers and the rest, beef farmers.

Quality silage
“Because of the geographical spread of our customers, we have a long working window,” explains Robert. “We’ll start first cut in the first week of May and won’t finish it until mid-July. This year the weather put us back and we were into the second week of August for the last few customers.

“The shorter the grass, the better its quality. So there’s a move towards more frequent cutting. We have farms that used to take 2 cuts, now taking 3, and those that took 3, now want 4. Some farmers are even operating a 5-cut strategy. In fact, we could still be cutting on 1st December!”

He adds: “Today’s Strautmann forage wagons have improved from the models that were around in the 1990’s. They now incorporate a CFS/feed rotor and this has revolutionised the pick-up operation.”

The CFS (Continuous Flow System) picks the grass up and spreads it out across the width of a helical rotor. This even distribution assures an even wear of the cutting blades, which in turn can then deliver a consistent 35mm chop. As a result, the machine requires less power and fuel requirement is estimated to be approximately 10-15% lower compared to other wagons.

“You can see the difference with the CFS compared to other makes of machine. It gives an even feed into the wagon, whereas without it, you can get lumps and surges when going across some leys.
“The CFS system certainly comes into its own with the short grass we see in third and fourth cuts. The staggered tines of the pick-up reel are a major advantage.

“Another difference we’ve noticed is that forage harvesters tend to mulch the grass when they chop it. But with the Strautmann wagons, the grass retains more of its natural structure and we don’t get the juice running out of it.”
Jack adds: “The CFS fills the wagon more evenly and we get more grass in a load.

“The forage harvesters produce a fine chop and this goes through the cows too fast. But with the forage wagons, the longer chop means it mats in the rumen and stays longer. Our dairy farming customers tell us they are getting better quality milk, and higher yields too.”

Two wagons
Robert is currently running 2 wagons - a Super Vitesse 3102 and the new compact version of the Giga Vitesse 3201.
The Giga Vitesse 3201 is the most recent purchase – seen and ordered at last year’s Royal Highland Show, and delivered in April this year. It has the same features as the popular 3601 model with 45 double-sided knives, however it is more compact in size being 1m shorter in length at 8.42m.

Robert explains: “We needed a lighter wagon because of the hills. Farms in the Yorkshire Dales have usually got tight yards and steep hills!  In fact it’s only a foot shorter than the Super Vitesse.

“The Super Vitesse is about 1.5t lighter than the Giga, and ideal for steep hillsides and wet ground. It’s got 6 blades less, and a narrower pick up reel, but delivers the same quality of chop sample.” 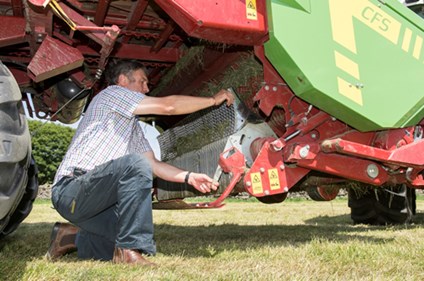 The blades in Strautmann forage wagons are double-sided and require removing for sharpening.

“This is better than machines with automatic sharpeners, because we take them right out and can see how much sharpening is actually needed,” says Robert.

“In the field, having blades which are double-sided is a real timesaver. There’s a quick release system which means it only takes 5 minutes to change them around, plus we always carry a second set and can soon change them all over. Then we’ll sharpen them in the evening.

“We reckon to do 250 acres per set of blades before they need removing for sharpening. They’ve a long life - last year we cut 4000 acres of grass with one set of blades.”

“The ABS is certainly worth having as we do a lot of road hauls. And we are frequently on undulating ground, so having guider wheels at the back of the pick-up reel is a no-brainer.
“Strautmann wagons are super heavy duty. In any contracting business, you’ve got to have the pedal to the metal to make the machinery pay.”

Scope for expansion
“We don’t advertise, but we are gaining work all the time. And we believe there is definitely scope to expand,” says Robert.

“So under discussion is whether to purchase a third Strautmann wagon – probably another Giga Vitesse. We’ve one customer with just over 300 acres who has 3 cuts taken, and we’ve been hiring in a wagon and driver. But as the business grows, and now Jack is full-time, maybe we could do with a third.”

Jack comments: “It’s drier out there and crops aren’t as good, especially towards the end of the season. Few farms were taking more than two cuts.”

Jack will be returning to Reporoa for another 3 months of silaging during the UK winter. When he returns, he’ll be working full time in the family business, taking on more responsibility for managing staff and tractors, and liaising with customers.
Olivia is also going away - to Harper Adams University to study a degree in agribusiness. Robert hopes she will return to work part-time in the business.

Meantime, for Robert and Cheryl, there is the beef suckler herd and sheep to manage, and the winter maintenance jobs for the council.

A shorter version of this article first appeared in