Staffordshire dairy farmers Steve Cox and son Tom are focused on feeding their high yielding herd as efficiently as possible. They take the time to produce good quantities of quality forages for the TMRs. Then they save time and costs by using a custom blend instead of straights, plus with their new Strautmann diet feeder, mixing and feeding out is also costing less, and is quicker too. 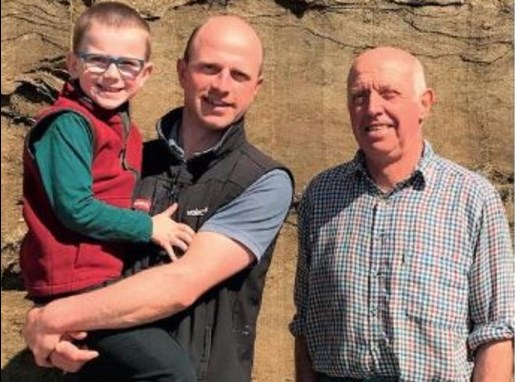 At Manor Farm, near Stafford, the Steve (right) and Tom (middle) Cox are milking 560 cows on three times a day milking. Yields are averaging 11,800 litres/cow, and milk is sold to Tesco. The herd calves all year round, and milking cows are indoor housed. Additionally, the Coxes rear all their beef-cross bull calves which are sold as stores at Shrewsbury market.

Top quality forages provide the base to the total mixed rations and attention to detail is paid at all stages of rations formulation and feed out.

“The most profitable crop is grass,” says Steve Cox. “And we need plenty of good silage to reduce our feed costs.”

At Manor Farm, grass leys are kept in good condition and regularly reseeded. Cutting for silage on the right day is important and the Coxes have their own self-propelled forager to enable them to take their cuts when they want.”

Typically four or five cuts will be taken over the season with first cut usually around 10th May.  Silage regularly analyses out at 11.5 MJ/kg DM of ME, with a high sugar content.

Around 81 ha (200 acres) of early maturing varieties of forage maize are grown each year, and again, harvested by the family.

They have also been growing forage rye as a catch crop in-between maize. Sown in the autumn it can provide a good early cut of silage before a May drilling of the next maize crop.

However, despite their focus on forages, at the end of last summer, silage stocks were looking lower than usual. So as a precaution, some locally grown fodder beet was purchased. This is loaded into the Strautmann diet feeder on its own each afternoon to be pre-chopped ready to be added into the next day’s TMR mixes.

The herd is on a complete TMR system. Steve Cox explains: “We stopped feeding cake in the parlour five years ago, and we’ve never regretted it. If you’re feeding good quality forage than the cows should already be full when they get in there.”

The milking cows, heifers and young stock are all fed the same TMR formulation, but in different quantities. Heifers receive 90-94% of the ration amount allotted to the milking cows.

The milking cows in the ‘high’ group are presented with a freshly mixed TMR four times a day which helps maximise DM intakes. They are also given more space to lie and feed. Cows in the other sheds will receive two TMR feeds a day with regular push-ups.

Stephanie Hurstfield, of Feeding Solutions who works with Steve and Tom to manage nutrition and ration formulation, says the aim is to feed 13 - 14kg of forage DM per cow per day. Of this, typically 30-40% is high metabolisable energy maize silage.

“To meet the nutrient requirements for the cows, a custom blend is used rather than straights. This saves them time and money and is also better for their cashflow.  The blend is formulated based on the forage analyses, milk quality aspirations and maintenance plus figure.

Ration mixing and feeding are carried out by Tom Cox or tractorman Arthur Mruk. Each day, four TMR loads are made for the milking cows, a straw-based one for the dry cows, one for heifers and older youngstock, and another for the 3-8 month old calves.

Over the winter months, there can be 1300 cattle to feed and it amounts to a ‘full-time job’.

The Coxes have always had paddle mixers, but last autumn when it was time to renew their diet feeder, they opted for one with vertical augers. 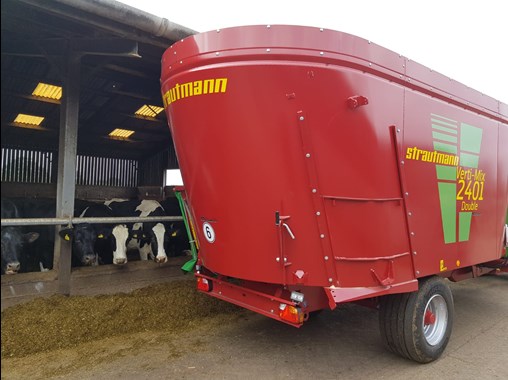 om Cox adds: “We are limited on height in some of the sheds, and we didn’t want a feeder with a double axle again, as we used to spend a lot on new tyres. It was also important to have one which provided not only a consistent TMR but would also dispense it evenly.”

Confident of the good service and back-up they would get from their local dealer KO Machines, the Coxes switched over to a Strautmann Verti-Mix 2401, with the optional extra of a conveyor belt which would enable feed to be dispensed from either the left or the right; this would alleviate the need to reverse down the barrier to feed out in some of the sheds.

“The change of design means the feeder is much easier to manoeuvre around the buildings,” comments Steve Cox. “It’s narrower too, so we don’t run over the TMR when we’re feeding down the narrower channels of the older sheds.”

Tom Cox has noticed fuel-savings too: “We can start the mixer on tickover with no revs required. So it uses a lot less power, and less fuel. It’s also kinder on the tractor PTO.”

The combination of the 2-sided feed dispenser, a stepped auger design giving a quicker mix, and an easier machine to move around the sheds, is saving 2 hours of time each day.

The weighing out and recording of ingredients is aided by a cloud-based Cow Connect app: which Stephanie can remotely access the program to add in new ingredients or update prices, as can Tom from a tablet in the cab, or from his phone.

Tom explains: “We can check back and see exactly what has gone into each load. We can also see how much was fed to each group; we used to write down the amounts in a diary in the cab, but now the app does all the maths.”