The Verti-Mix SF and Sherpa are the result of Strautmann's experience in fodder mixing technology for over the last 20 years. The Strautmann Vario2 mixing auger technology substantially contributes to increasing the productivity of modern dairy farms.

Self-propelled fodder mixing wagons make the labour-intensive dairy cattle feeding procedure much easier thus saving time and labour. Homogeneously mixed ingredients prevent the cows from selecting the fodder. Higher milk yields are achieved with improved ingredients distributed evenly. All animals are optimally fed from the physiological point of view and less prone to diseases which leads to healthy, long-living cows and a high degree of effectiveness.

International scientific studies have revealed that the efficiency in milk production can be increased many times over by the use of feed mixing wagons. Due to the mixing of individual components to a TMR (partial or total mixed ration), the animals can no longer be selective and thus take up the same feed make-up with every bite, which ensures optimum physiological care of the entire herd, regardless of the position of the individual animal in ranking. 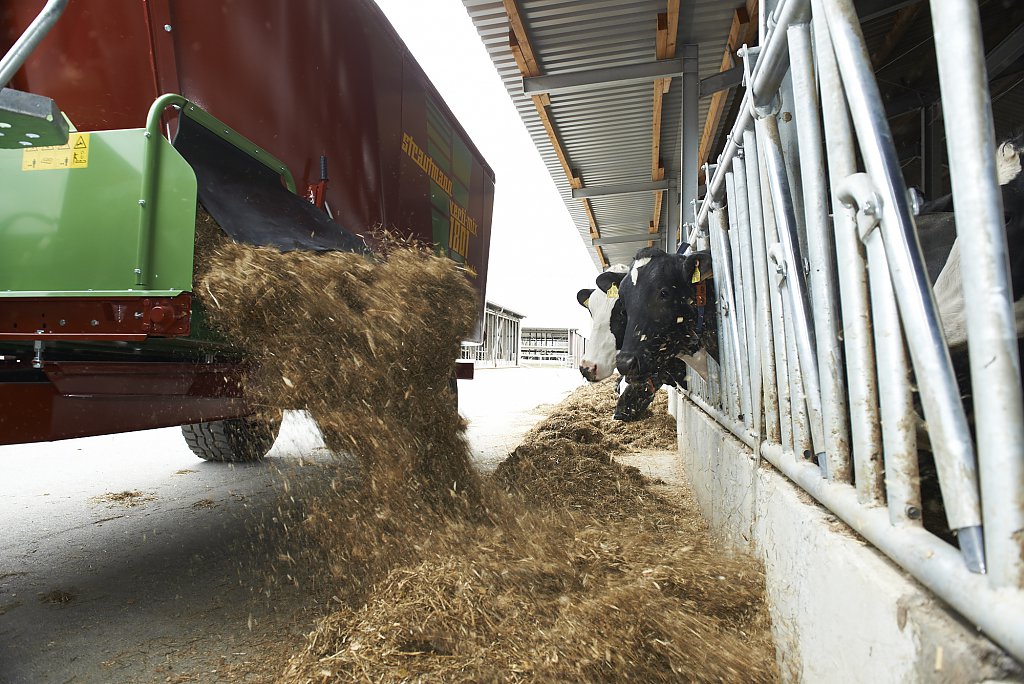 First, choose the capacity..... This should be chosen depending on the feed ration and the number of cows per m3 when feeding once a day.

Second, choose your discharge...... A huge range of discharge options, ranging from side discharge, conveyor and rear discharge allowing the feed or bedding to be placed exactly where required. 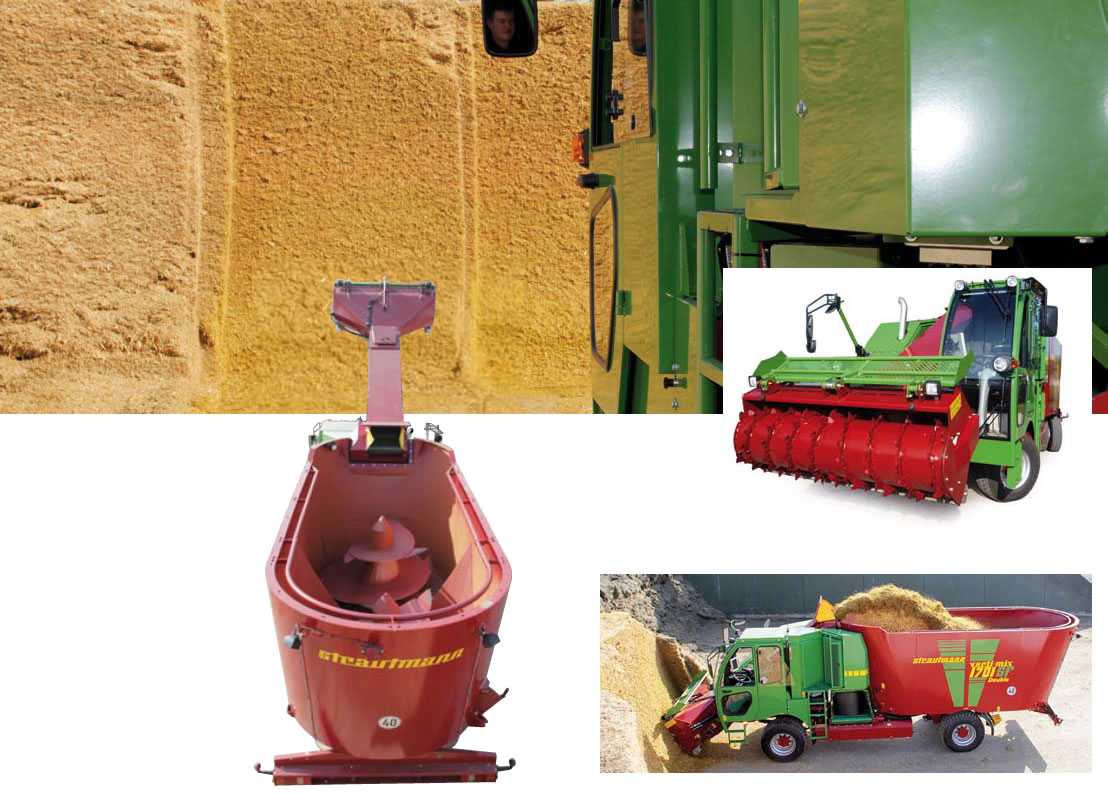 Variability and strength for any purpose. Due to the patented knife adjustment system and the updated Vario2 auger design, the Vario mixing auger can be perfectly adapted to your specific conditions of use. The robust and low-maintenance angular gearbox ensures long service life even under challenging conditions.

All Strautmann mixer wagons – single and double augered - will now come fitted with a Vario2 auger as standard. Its stepped design enables a good mix to be achieved more quickly. This reduces mixing time of each load by a minute or so per load, but due to the number of mixes made each day, the labour and fuel savings will significantly add up over time.

The heart of the Vario mixing auger is the very heavy duty and durable gearbox. Stability and long maintenance intervals are achieved by means of a large-sized pair of tapered roller bearings, double sealing and a large grease chamber. 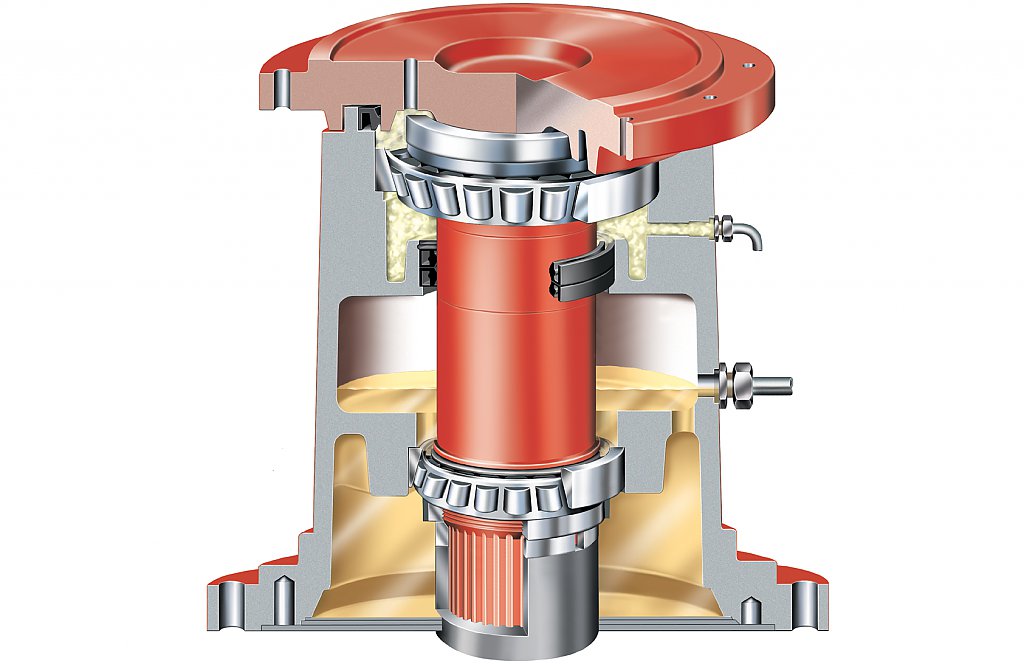 Longer term, machinery repair and replacement costs can be reduced by requesting the INNODUR stainless steel wear strip to be fitted to the leading edge of the auger. This is a replaceable part, further extending machine lifetime. 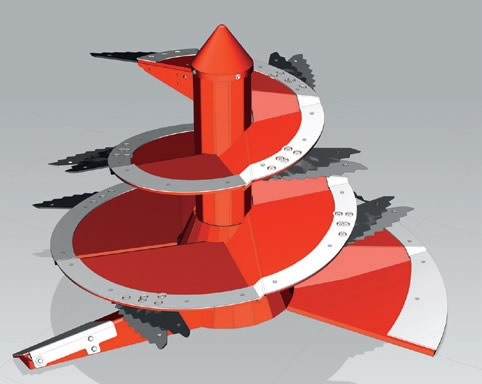 Highly effective magnetic separation of metallic foreign objects. The Strautmann magnetic system (optional extra) directly mounted at the mixing auger offers optimum health protection for your high-yield cows. The system is mounted such that it is in direct and close contact with the mixed fodder, thus working very effectively. 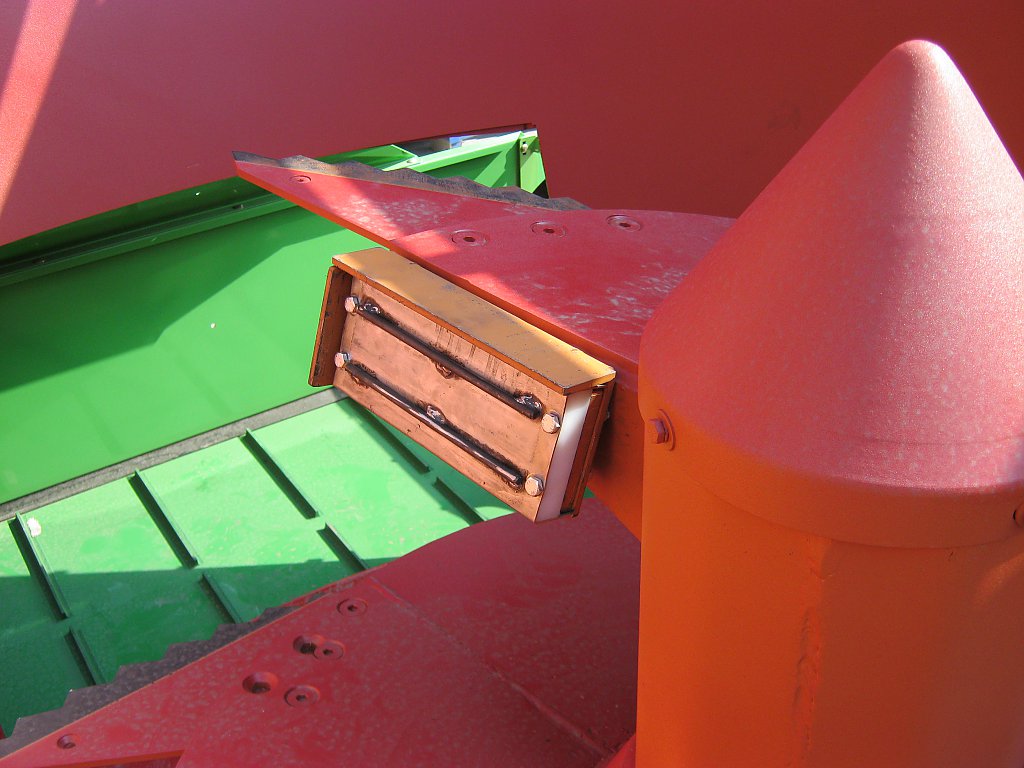 Two manually adjustable counter-cutters enable the processing of larger quantities of long-fibre fodder such as round and square bales. 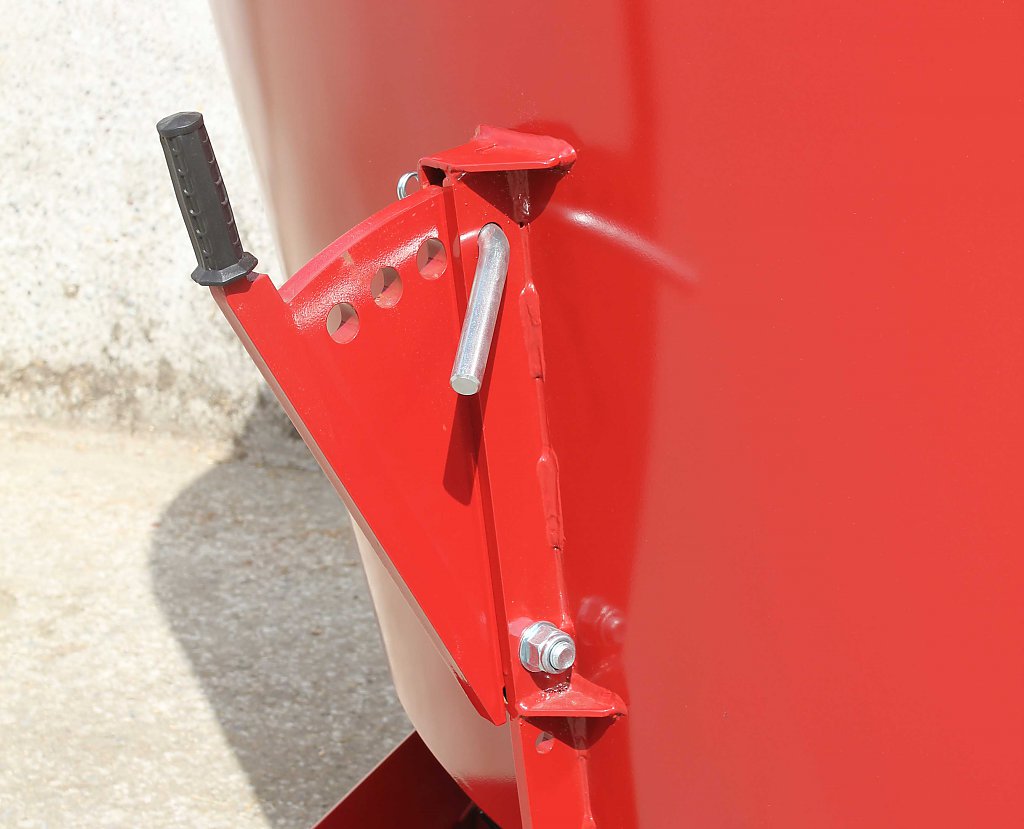 The optional two hydraulic counter-cutters can be directly adjusted from the driver seat. 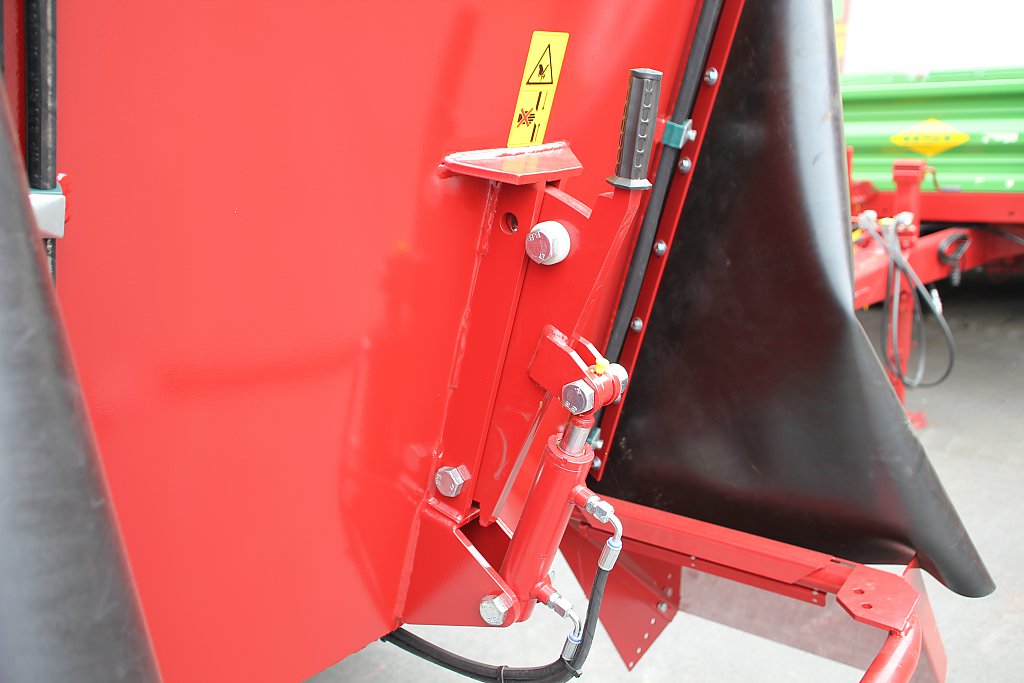 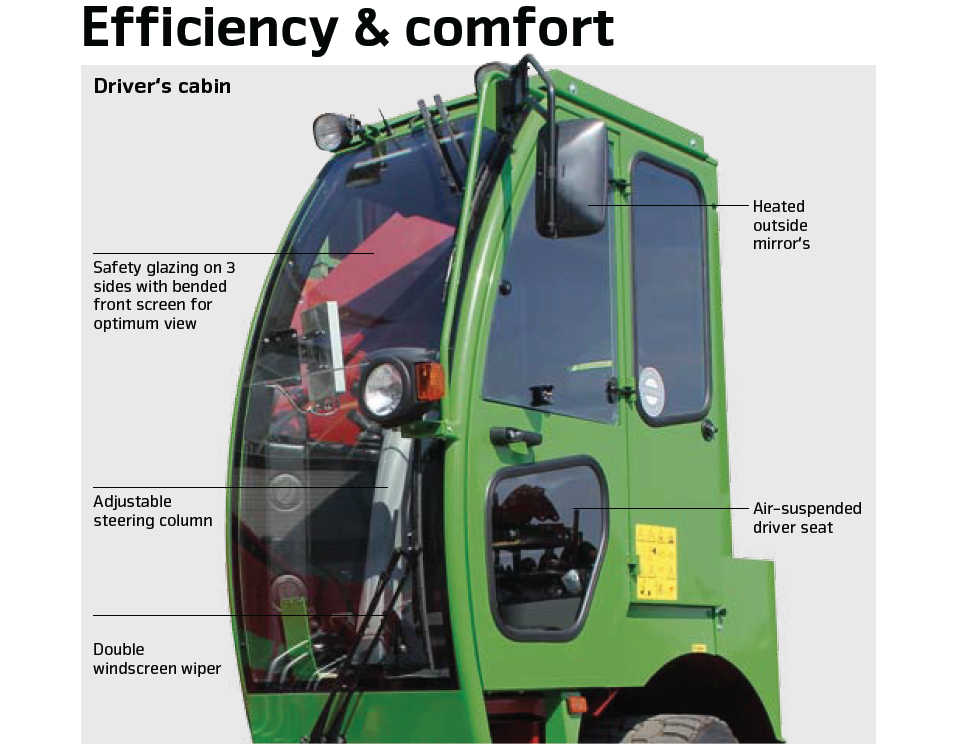 A mineral feed funnel can be mounted at the mixing container on request. This makes it easier to fill in smaller quantities of fodder such as e.g. mineral feed or lime. 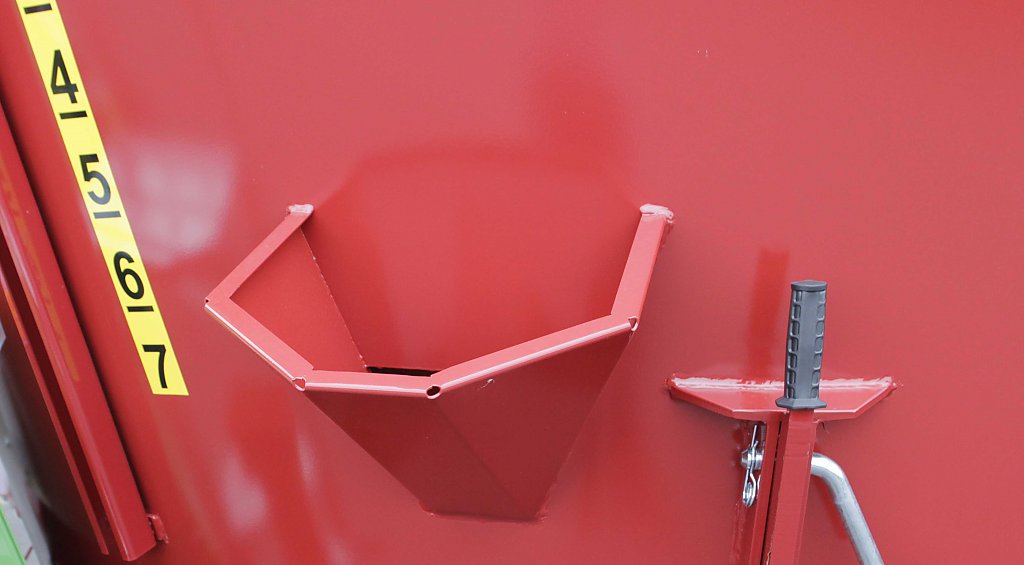 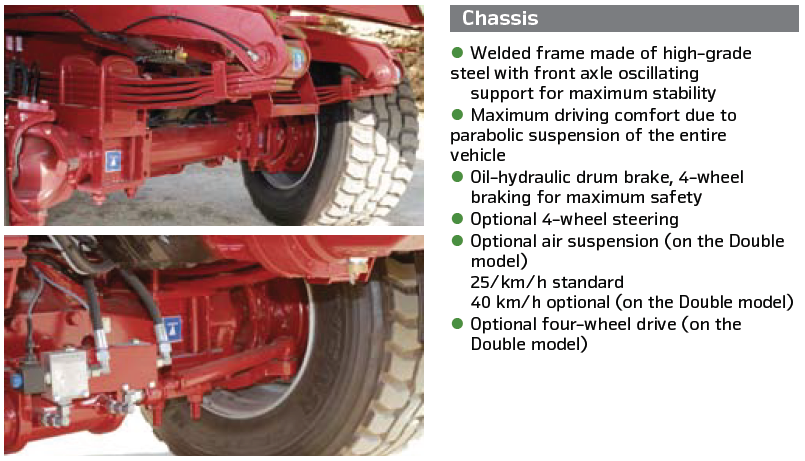 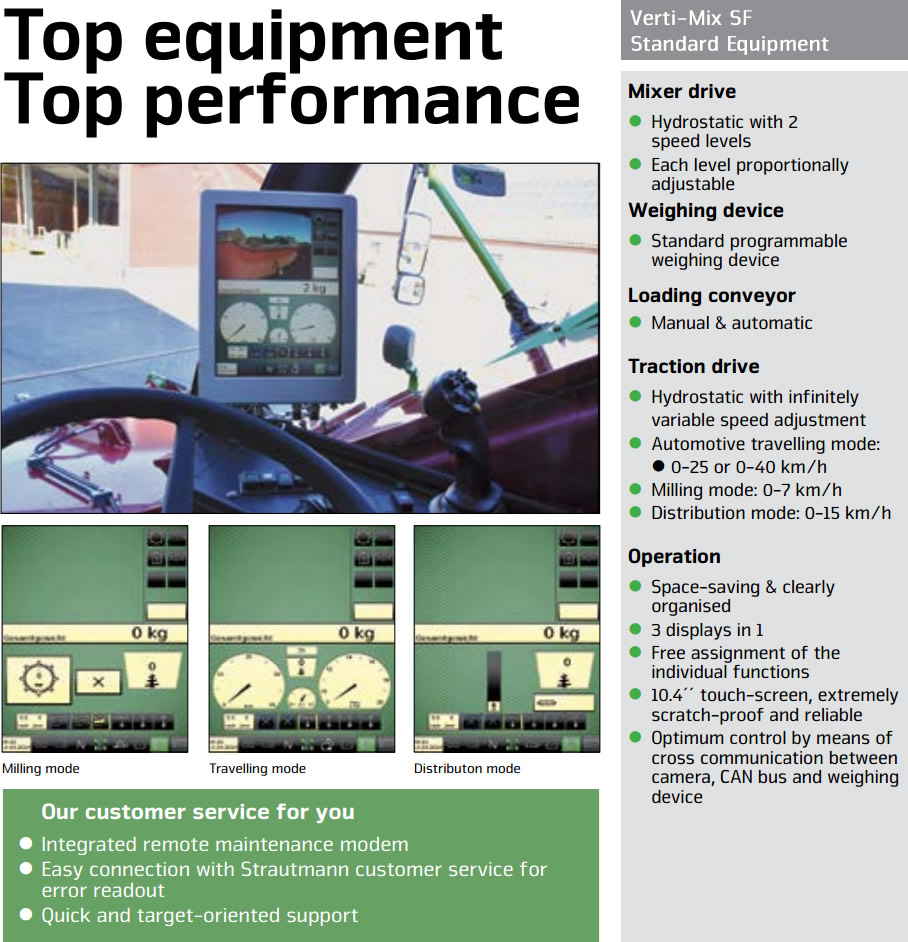 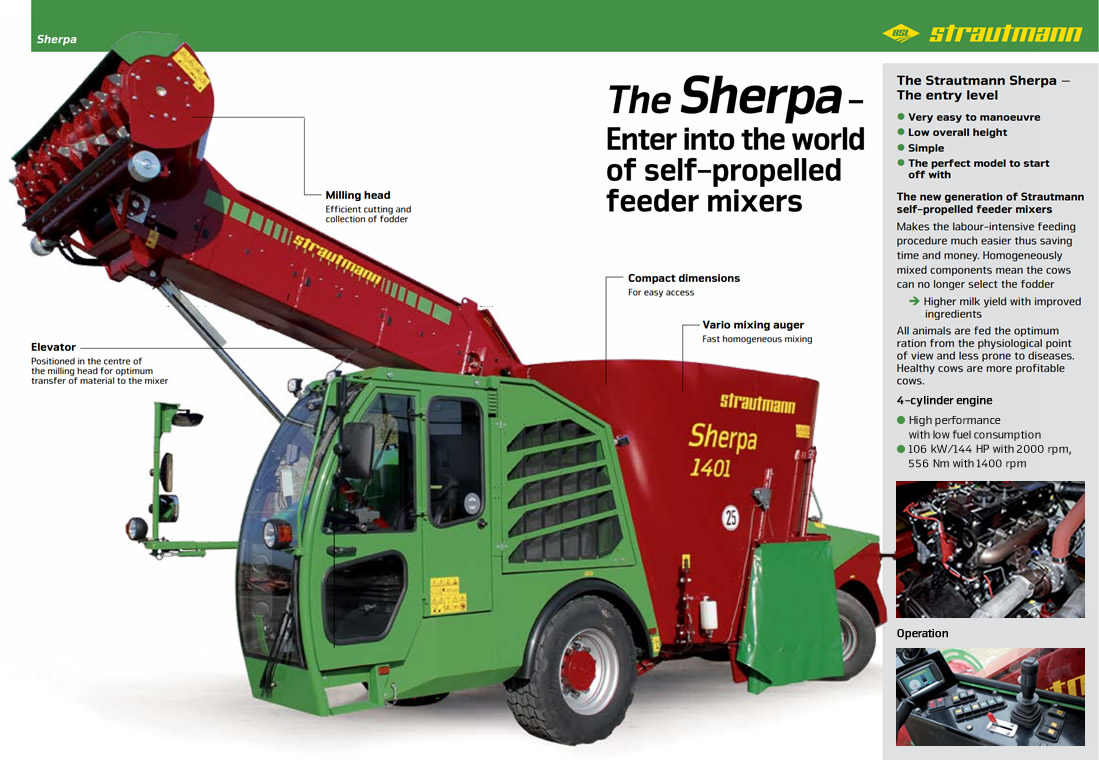 The Strautmann self-propelled one auger mixer has a capacity between 11 and 15 m³, depending on the machine. Easy handling combined with interesting technical equipment make the Verti-Mix SF the ideal entry-level model and the reliable partner for future-oriented enterprises.

Two augers for favorable dimensions and efficient working – that is what the Strautmann Verti-Mix Double SF offers. With its capacity of 14 - 20 m³ and sophisticated technology, this fodder mixing wagon is suitable for larger enterprises with demanding requirements in terms of handling and comfort. 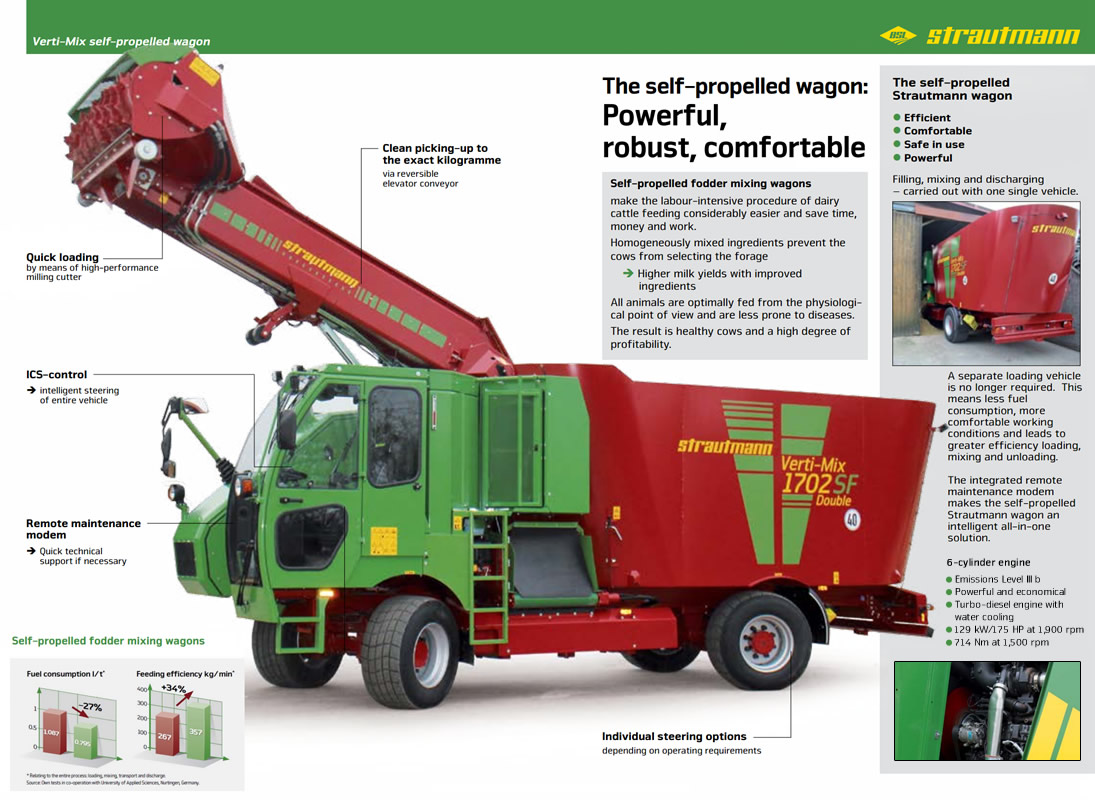 Variable conveyor speeds achieved by means of different motors or direct adjustability enable the fodder discharge width to be adapted as far as right up to directly in front of the feed fence. A unique lattice bar roller as return roller for the crossover conveyor prevents the fodder from piling up between the roller and the conveyor. An optional hydraulic side shift of the conveyor gives added flexibility. 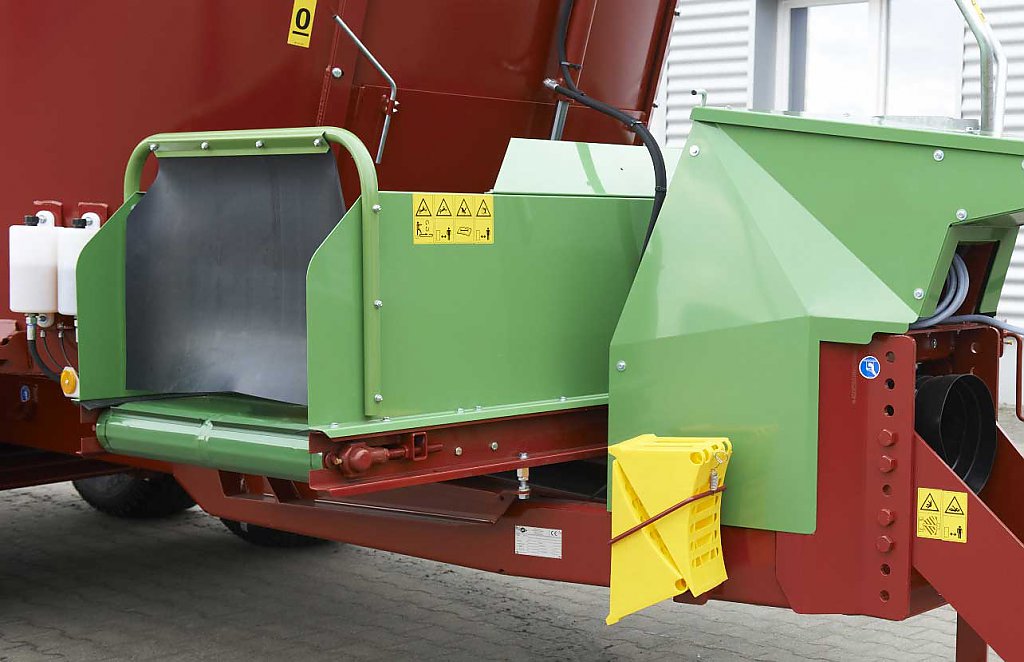 The cleaner and more germ-free the cubicle, the healthier the animals. The ideal litter materials are straw, peat, sawdust and lime. After the mixing process in the container has been finished, the litter is spread up to the head region of the cubicles via the drum – comfortably and reliably for maximum animal comfort and udder health. Only in combination with electrical operation. 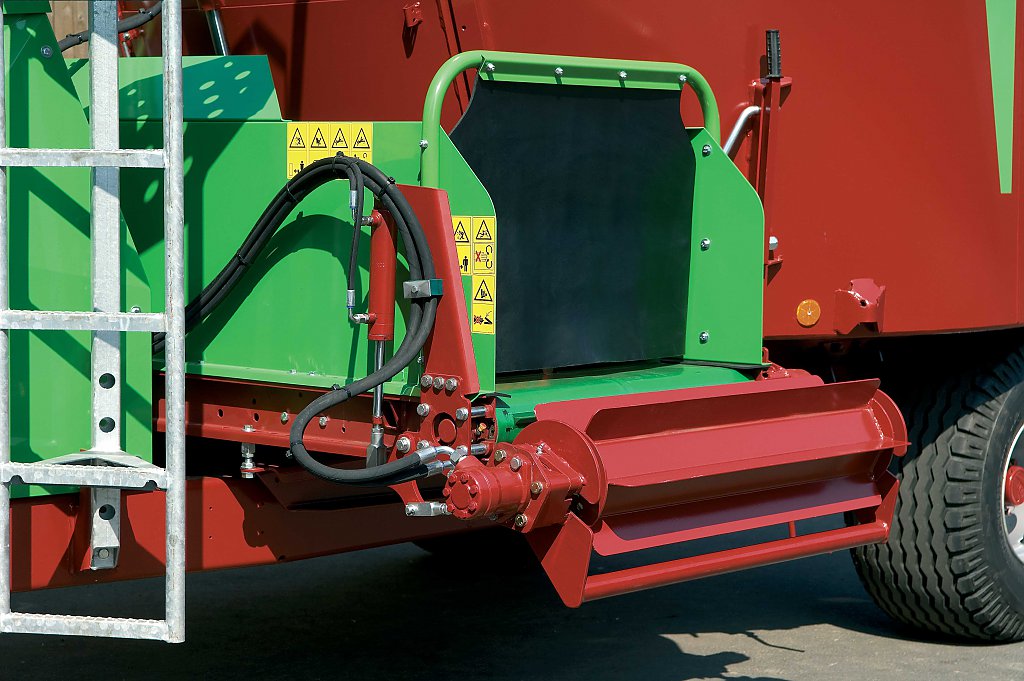 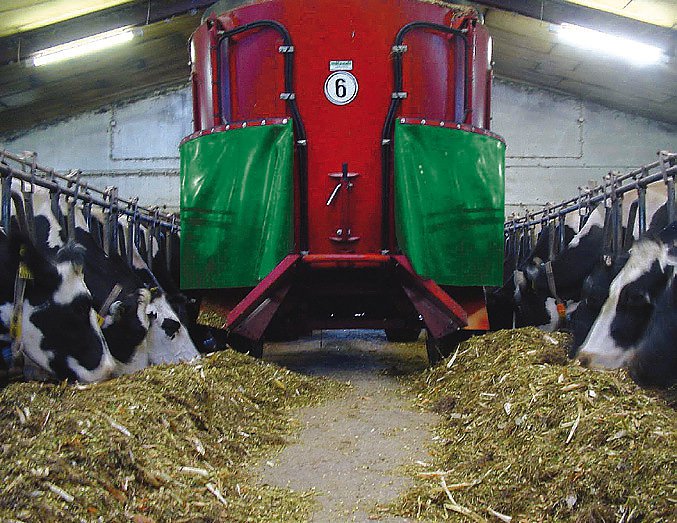 Variable conveyor speeds achieved by means of different motors or direct adjustability enable the fodder discharge width to be adapted as far as right up to directly in front of the feed fence. A unique lattice bar roller as return roller for the crossover conveyor prevents the fodder from piling up between the roller and the conveyor. 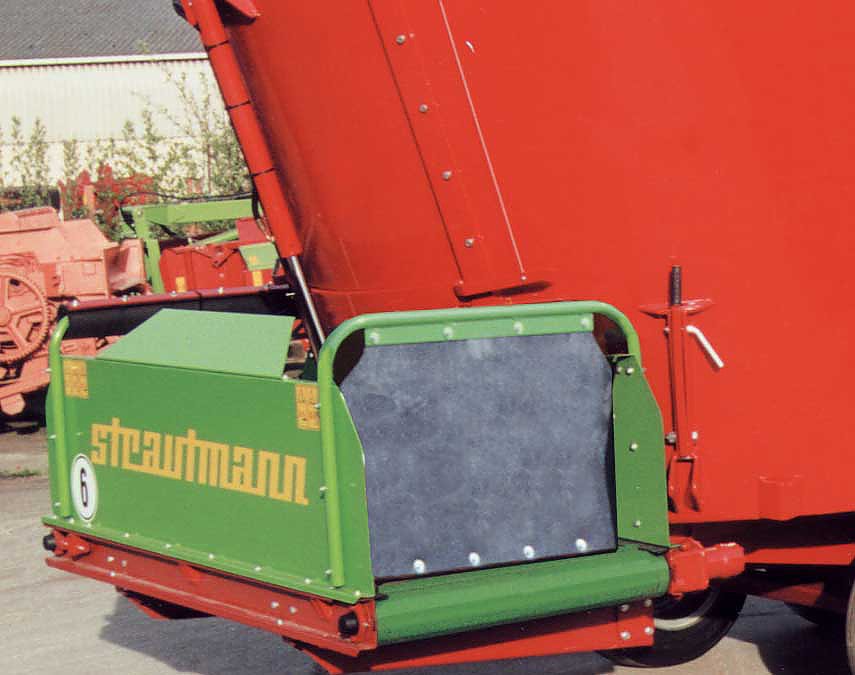 For preparation of premixes or central fodder discharge on the feeding table, Strautmann offers a rear centre discharge. 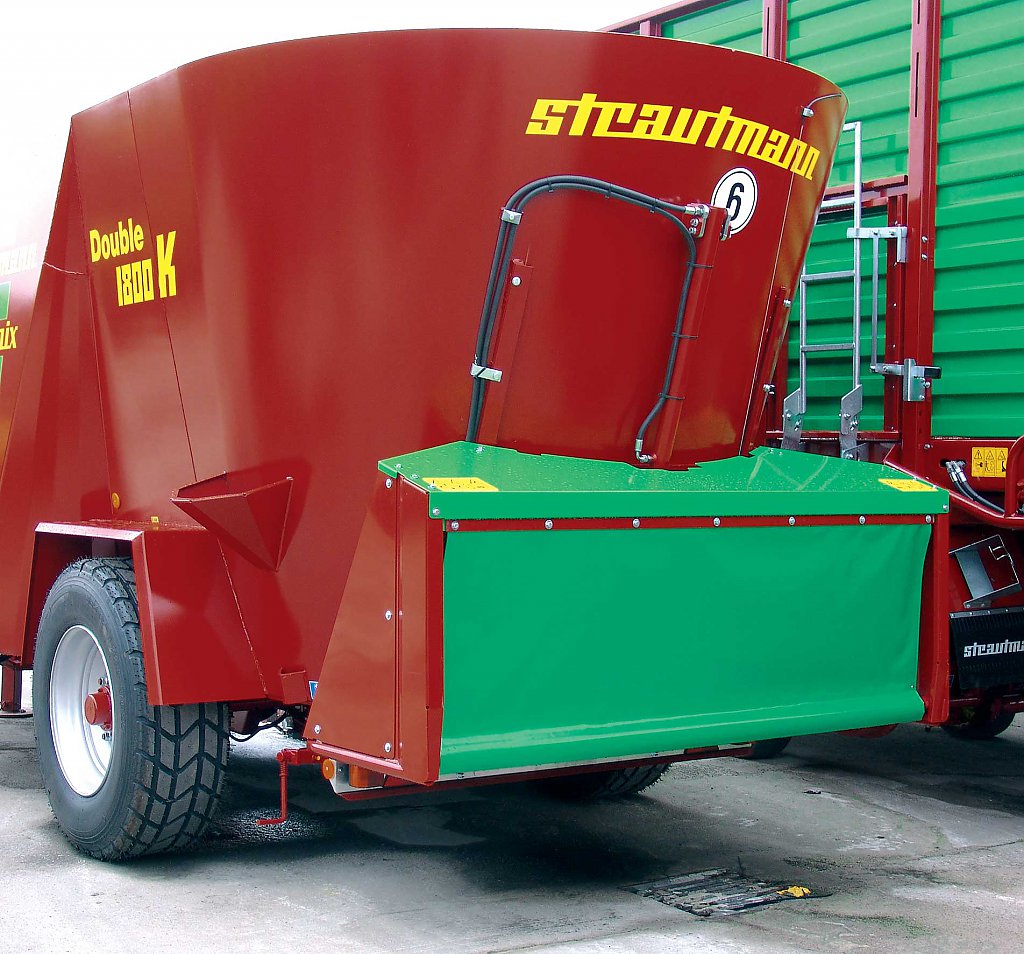 For higher troughs, a 1m long conveyor extension adjustable in height can be mounted at the side of the crossover conveyor. 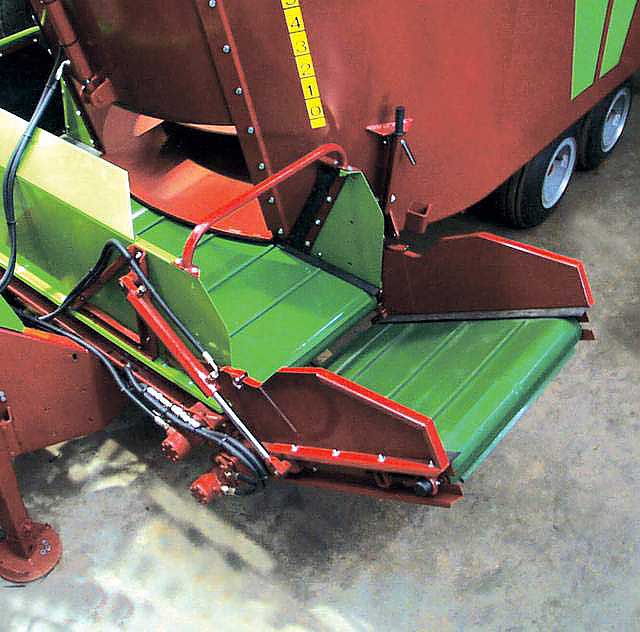 Side door discharge: Sherpa model only

Verti-Mix Self Propelled Brochure: Download
More downloads
Back to top 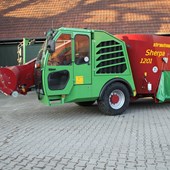 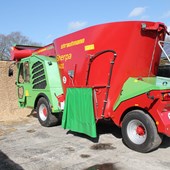 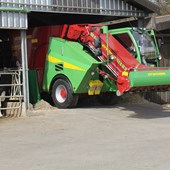 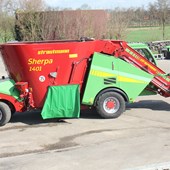 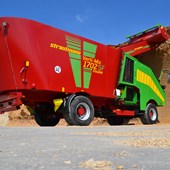 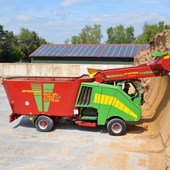 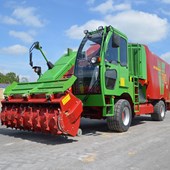 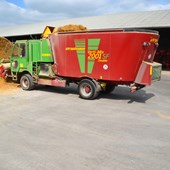 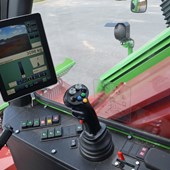